Immediately following the earthquake, the tsunami and the Fukushima meltdown, Canadian-American writer and Zen Buddhist priest Ruth Ozeki decides to scrap her original attempt at her third novel believing her work was no longer relevant for the forever changed Japan. The result of her revisions: A Tale for the Time Being. Since its publication in 2013 the novel has had quite a bit of success and recognition including the 2013 Man Booker Prize Finalist, the 2013 Los Angeles Times Book Prize for Fiction, and the Kitschies Red Tentacle for best novel. [1] Ozeki’s novel was also named a New York Times Bestseller and recently awarded the 2015 Association for Asian American Studies Award. [2]

The novel explores two interlocking narratives—Nao’s diary and the story of diary’s finder, Ruth. Nao is a sixteen-year-old girl writing in a French café somewhere in Tokyo. Due to her father’s recent unemployment after the dot-com crash, Nao and her family has relocated from California to Tokyo. During this time, Nao faces the struggles of poverty, ruthless school bullying, and a suicidal father. Unable to bear all of her loneliness and her classmates’ bullying, Nao decides that there is only one escape. However, before ending her life, Nao decides to write a biography of her late great-grandmother, a century old Buddhist nun who was once an active anarchist and feminist in her younger years. In her attempt to write this biography, Nao reveals her struggles in navigating her own existence.

Not too long after the 2011 tsunami and Fukushima meltdown, a Hello Kitty lunchbox washes upon the shores of Vancouver Island. Ruth, a novelist, discovers that within this lunchbox hides several different artifacts including a diary. Upon reading the diary, Ruth is pulled into the past as she tries to solve the mystery of Nao’s unknown fate.

Despite being somewhat irritating at times with her moments of teenage angst and cruel encouragement of her father’s attempts at suicide, Nao is the most dynamic and endearing character within the novel. The reader witnesses Nao’s transformation from helpless victim of school bullying to a tragic figure contemplating suicide and finally to a young woman finding her superpower and the strength to live. Even though she endures more in her short sixteen years of life than most adults face within an entire lifetime, the style of Nao’s narration, meant to mimic a diary, makes the reader feel an immediate connection with the character. This connection is even established on the very first page:

My name is Nao, and I am a time being. Do you know what a time being is? Well, if you give me a moment, I will tell you.

A time being is someone who lives in time, and that means you, and me, and every one of us who is, or was, or ever will be. As for me, right now I am sitting in a French maid café in Akiba Electricity Town, listening to a sad chanson that is playing sometime in your past, which is also my present, writing this and wondering about you, somewhere in my future. And if you’re reading this, then maybe by now you’re wondering about me, too.

You wonder about me.

Not only does Nao create her connection with the reader with this short introduction, but she also introduces one of the novel’s most thought-provoking themes: the fluidity of time and persons in time. All of the major characters within this novel are concerned with some aspect of time. For Nao, time provides her with a connection to all beings in her otherwise emotionally solitary life. Other than Nao’s own musings on time and her existence as a time being, Ozeki masterfully blends different philosophies concerning time ranging from Schrodinger’s quantum superposition to the works of Proust and Dōgen to display the human desire to connect with one another through writing and time.

Do not think that time simply flies away. Do not understand “flying” as the only function of time. If time simply flew away, a separation would exist between you and time. So if you understand time as only passing, then you do not understand the time being. To grasp this truly, every being that exists in the entire world is linked together as moments in time, and at the same time they exist as individual moments of time. Because all moments are the time being, they are your time being. [3]

This novel is for any reader who is ready to think and to potentially reread several portions of the story in order to pick up on some of Ozeki’s most subtle clues. The reader might also have to do some of his/her own research to understand multiple references to Japanese culture and complex philosophical ideas (even though Ozeki provides some footnotes and appendixes on these subjects). Even though this reading requires some work and agency on the reader’s end, Ozeki’s unique tale that travels across both seas and time is well worth the effort.

A Tale for the Time Being

403 pages. Published by the Penguin Group

Before attending the UMF’s production of Cripple of Inishmaan, I was rather curious as to how Billy’s monologue was going to be staged. After all, the monologue makes a rather complex scene. Upon the first time reading the script, the reader often believes that perhaps Billy is nearing the end of his life, but after reaching the big reveal, the reader realizes this scene merely depicts Billy practicing some lines for a screen-test. In a way, this monologue pokes fun a melodrama as Billy himself comments on the absurdity of having to sing “Croppy Boy” for the scene. Knowing the script inside and out, the director then has to make the difficult decision of either having the scene be completely serious, or perhaps hint to the audience that what is happening may not be what it appears to be.

The UMF production went with the serious interpretation of the scene, which proved to be quite moving and powerful. This was one of two scenes where the audience did not applaud at the end. The audience was too moved to clap after such a serious and upsetting scene. Deciding to make Billy’s monologue appear authentic and not just reciting a script made Billy’s return much more exciting for the unsuspecting audience members. Several gasps of genuine surprise were to be heard when Billy was revealed behind the projection screen.

The production’s actual set design of the monologue was also very interesting and powerful. The actor who portrayed Billy performed the monologue in a small space just above the actual stage. The physical separation of this space from the rest of the set shows Billy’s own distance from his home. The decor was much more scarce than in the script. There was really only a chair and a table compared to a whole hotel room’s worth of furniture. This small amount of furniture added a sort of starkness to the scene. The focus falls on Billy’s words and actions without the audience being overwhelmed by a whole new set of furniture and props.

Even though the monologue was very serious and powerful, there is one element in the set design that evokes the sense that not everything is as it seems. This element is how the small space has a sort of screen or glass wall. This glass wall, while meant for the safety of the actor, creates a separation between Billy and the audience. This separation, as well as the upward angle of the space, seems to mimic the sense of watching a film in a movie theatre. Even though this is very subtle, an audience member who may have some experience with the play might recognize from this staging that this monologue is not quite as it seems for a first time viewer.

While comics and their film adaptations still focus heavily around the male heroes, Marvel separates itself from DC comics by creating unique female heroes who exhibit agency within the story. DC, on the other hand, tends to just create female equivalents to preexisting male heroes (Superwoman, Batgirl). The most recent of Marvel’s female action heroes to hit the big screen is Gamora from Guardians of the Galaxy.

Gamora is a fairly simple character to understand since the writer’s of Guardians of the Galaxy seem to play off every trope explored by Jeffrey A. Brown in his book, Dangerous Curves: Action Heroines, Gender, Fetishism, and Popular Culture.

The first of these tropes often associated with the action heroine is that she is “often filmed to accentuate her body, but this new hardbody is not offered up as a mere sexual commodity” (25). Instead, her body is coded as “both object and subject,” or, in other words, “her body does not exist to solely to please men, it is a body designed to be functional” (25). The image above shows how creators are drawing attention to Gamora’s body using the tight leather outfit, but the leather also implies a sort of utility. The audience becomes aware fairly early in the film that Gamora is not just some eye-candy to accompany this group of male heroes, but her body was actually designed to be a lethal weapon; thus making Gamora the most dangerous out of the five. Also, she is considered to be one of the most covered up compared to her companions (looking at you Drax and Groot).

Not only is Gamora’s body a lethal weapon, even her fitting style stays within the guidelines of Brown’s analysis. Brown explains how the action heroine’s strength “is represented through the heroine’s superior ability in martial arts” (31-32). Starlord and Rocket rely on their guns, Drax and Groot rely on their brute strength, but Gamora is the only one who seems to have any martial arts training. While this initially seems to be a limitation to not allow Gamora to wield any sort of firearms, the audience becomes aware within the first few fighting scenes that Gamora does not need firearms or brute strength. The audience witnesses as the rest of the characters become bogged down by their weapons or lack of fighting skills, but Gamora never seems to fail with her martial arts fighting style.

Even though Gamora mostly exemplifies the female hard-bodied action heroine, she also incorporates some elements of the femme fatale. One popular example from the film where Gamora takes on the role of the femme fatale is the scene when she first encounters Starlord. Gamora casually leans up against the side of the building, eating some type of fruit, and starts to engage Starlord in conversation. Gamora expects Starlord to underestimate her, so she takes on this role to gain further advantage. After all, just a few moments after assessing her as no real threat, Starlord is then mercilessly attacked. 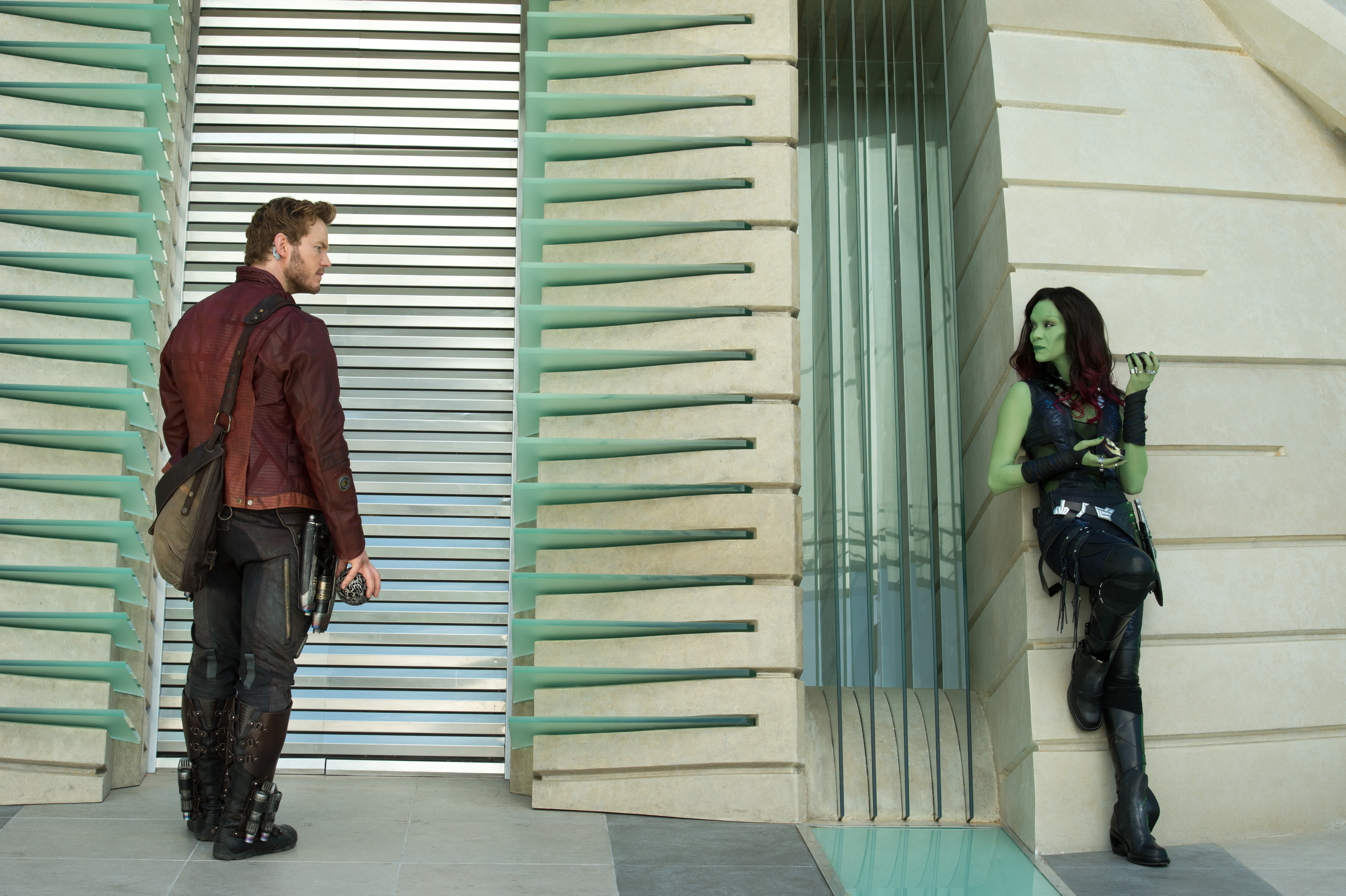 Despite being a stereotype of the hardbody action heroine, Gamora is still a rather enjoyable character since she exhibits one trait that is often lost to female heroes: a sense of agency. All too often, the male heroes are the ones to drive the plot forward while the female heroes just accompany them. Gamora, on the other hand, seems to be one making a lot of the decisions for the rest of the heroes. In fact, she is the one who not only convinces the others that they need to take the stone back from Ronan, but who also has a dramatic fight scene that determines the outcome of their entire plan. In short, Gamora is both a stereotype and innovative.