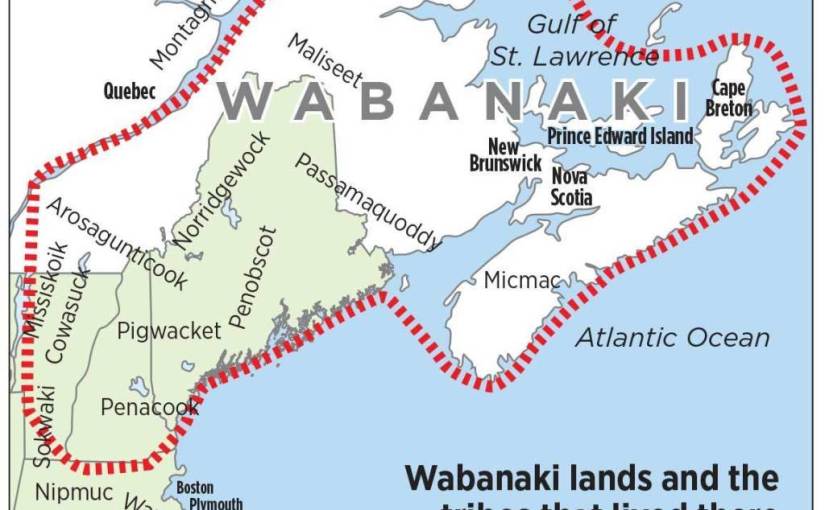 Case did some research on land acknowledgements with her colleague, Steve Grandchamp. She said that there are critics of these practices, even by those who are advocates for Native people. “I felt like it was important to find out why and if you are going to do a land acknowledgement, what is important to include in it and what are the best ways to do it.” said Case. This was when Case realized that it would be best to practice this exercise for one of her classes with her students. “We did research about the local area,” said Case, “and the different tribal nations in Maine and to come up with a language that we wanted to use together, so that it was more of a community statement. It felt appropriate for the New Commons Project.”

Case and her students were able to discuss what they had come up with for the land acknowledgement with Lisa Brooks, a scholar of Indigenous studies, who was a keynote speaker for the New Commons event “The Canoe.” Case was able to get input from both Brooks and colleague Sabine Klein who does research on Native American history.

Case had her class work together to figure out what works and what doesn’t, “We had them work in groups for people to find out that information,” said Case. “They had to write a draft for what they would say for a land acknowledgement.” Her class had four different versions of land acknowledgements. Case notes, “We picked out elements we liked from each one and combined them into one final one.”

Land acknowledgements have been read at every New Commons event this semester, and Case said that she wants it to be an ongoing thing, “We wanted to commit to the idea of making an acknowledgement sort of something that we don’t just do once for a Native American speaker, but for something that’s part of our ongoing way of doing things.” She states how it should be something that is a part of everyday life that reminds people of whose land we’re on, “Not just on Indigenous People’s Day,” said Case, “but on every occasion.”

The New Commons class worked together to figure out what ideas worked for a land acknowledgement such as researching tribes that lived on this land to make it more relevant to the UMF community. “We looked online at previous examples of land acknowledgements,” said Hodgkin. “We sort of mixed everything together, and made it applicable to us, and made sure that it flowed well.”

“Even though we started it during an event with a Native American writer,” said Hodgkin. “We didn’t want it to be pandering.” Hodgkin believes it is important that a land acknowledgement is read before every New Commons event from here on out, “We wanted it to be something that continued, that even when I’m out of school, or that when the professors are no longer teaching about Native American Studies or at least in the way that they did, that it [the land acknowledgment] will be something that continues throughout the years.”