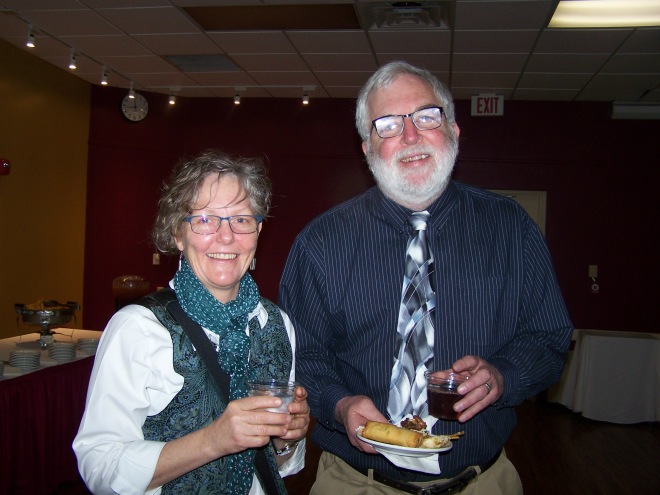 The Division of Humanities (which includes the Department of English) each year hosts a spring reception to celebrate the accomplishments of the past year. Faculty members Pat O’Donnell (UMF’s Trustee Professor), Kristen Case (Little Arias), and Jeffrey Thomson (Fragile) read from recently published work or work  in progress. Miriam Cohen and Roshan Luick provided music.

Several students were honored for receiving awards and fellowships from organizations outside UMF, including several Fulbright Fellowship winners (which will enable the students to pursue research or creative projects or teach English as a foreign language): Travis Bent (a history major minoring in French and Spanish whose Fulbright will allow him to serve as an English teaching assistant in Spain); Kyle Manning, who graduated in 2015 as an English and Creative Writing double major, and who will be spending a year in Quebec researching bilingual comic blogs; Caroline Murphy, Secondary Education-English (also a 2015 graduate), who will be an English teaching assistant in Bulgaria.  Additionally, Creative Writing and English major Kim Arthurs completed a semester with the Movies from Marlboro program for young filmmakers.

Humanities students won several other writing prizes over the past year: Aimee DeGroat was a finalist in the Hollins University Fiction Contest for her story “Feel Something.” Tim Bushika took first prize in UMA’s Terry Plunkett Poetry Festival Student Poetry Contest for “Six Days at the Bottom of the Ocean.” Nathaniel Duggan won the COPLAC (Consortium of Public Liberal Arts Colleges) David J. Prior award for outstanding essay on the public liberal arts experience for “Liberal Arts Degrees and Lobster Tanks: A Lesson in Stopping to Smell the Fishy Roses.”

Each year the Division of the Humanities Presents two honors for achievement in the the field of English, the Eleanor Wood Scholarship and the Maude L. Parks Award. In 2016, there were ten students who were finalists for the awards. There were two winners, and eight students who earned honorable mention. Honorable mention went to: Samuel Bennett, Tiffany Bishop, Julia Fletcher, Tyler Gadaire, Carolyn Newhouse, Janelle Noonan, Laura Pulito, and Kristen Simmons.

The Maud L. Parks Award was presented to Holland Corson.

The Eleanor Wood Memorial Scholarship was awarded to Brigid Chapin.

Michael Johnson is Professor of English at the University of Maine at Farmington. View all posts by Michael K. Johnson