FARMINGTON, ME (September 20, 2011)—The University of Maine at Farmington is proud to present the “Native American Film and Performance University Forum,” an insightful series of film screenings, talks, and performances centered on illuminating contemporary Native American experiences. This series of events is free and open to the public and will be held throughout the fall at venues across the UMF campus.

Native American actors and artists have been on screen since the earliest days of Hollywood, but in the past decade, have been exercising more control over all elements of filmmaking—as writers, directors and stars. There has been a similar movement in theater, as Native American performers have been taking to the stage to tell their own stories.

The purpose of the Native American Film and Performance University Forum is to make some of these sometimes hard-to-see films and performers available to the UMF campus and to the larger Farmington community. This is a rare opportunity to welcome Georgina Lightning, actress and filmmaker of the Cree Nation; and William Yellow Robe, Jr., actor, director, and playwright of the Assiniboine Tribe, to the UMF campus. These artists will share their work with the audience, collaborate with students and make themselves available for conversation and discussion.

Friday, October 14
A Conversation with Georgina Lightning
11:45 a.m. –1 p.m.; The Landing, UMF Olsen Student Center
Director and actress, Georgina Lightning, will participate in a general discussion of contemporary Native American film and media creation as well as of her own experiences in the film industry. 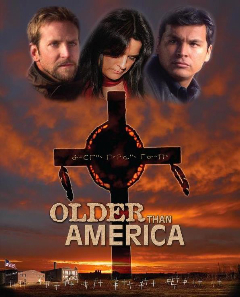 The UMF Native American Film and Performance University Forum events are sponsored by the University’s Culture Committee; Office of the Provost; Emery Community Arts Center; UMF Division of Humanities; Mantor Library; UMF Department of Sound, Performance, and Visual Inquiry and Gedakina— a multigenerational endeavor to strengthen and revitalize the cultural knowledge and identity of Native American youth and families from across New England and to conserve their traditional homelands and sacred places. 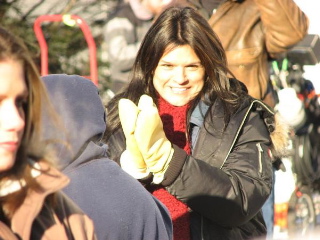 Georgina Lightning is well known as an actress (she’s appeared in dozens of films and television series, including “Walker, Texas Ranger” and “The West Wing”) and as an acting coach (working in over 200 films and television shows in that capacity). Her directing and writing debut in “Older than America” (2008) made her the first native woman to direct a feature film. She is also one of the founders of Tribal Alliance Productions, which their website describes as a native-owned production company that supports media creation by indigenous folks of all tribes, bands and backgrounds. 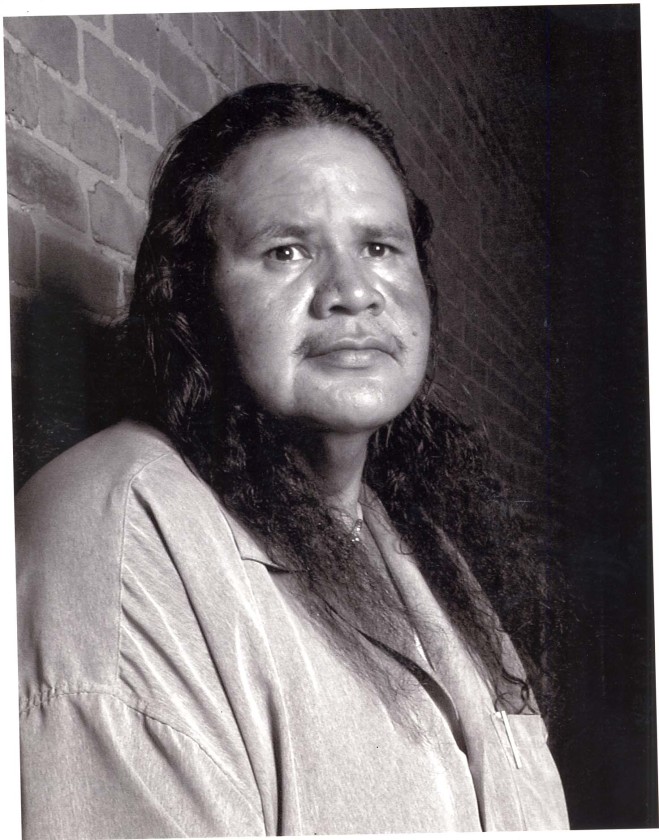 A well-regarded playwright, William Yellow Robe, Jr. has published two anthologies: “Where the Pavement Ends: Five Native American Plays” and “Grandchildren of the Buffalo Soldier.” He has served as the artistic director of Wakiknabe, an inter-tribal Native American Theatre Company, at the University of New Mexico, and is one of the founders of the No Borders Indigenous Theatre Company. He has taught courses recently at the University of Maine-Orono, where he was teaching when he received one of the inaugural Native Achiever Awards from the Smithsonian Institute in 2010. His play “Grandchildren of the Buffalo Soldier” was performed at the National Museum of the American Indian in conjunction with his acceptance of that award. His most recent play,” Thieves,” will have its world premiere at The Public Theater in New York, August 3-14, 2011, directed by Steve Elm 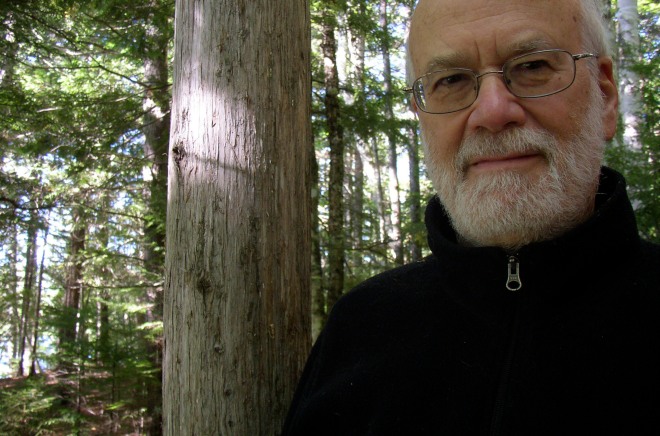 FARMINGTON, ME (September 19, 2011)—Wesley McNair, University of Maine at Farmington professor emeritus, writer in residence and Poet Laureate of Maine, has been selected as one of five state poets laureate to give a reading of his poetry and sign his books at the National Book Festival, in Washington, DC.

The National Book Festival, organized and sponsored by the Library of Congress, will be held on the National Mall on September 24 and 25. President Barack Obama and First Lady Michelle Obama are the honorary chairs of the event and will be in attendance. A crowd of over 150,000 is expected.

Over 100 authors and illustrators have been invited to give presentations at the Festival, including Toni Morrison, Russell Banks, Garrison Keillor, Mary Gordon and Sherman Alexie. The Festival will begin on September 23 with a dinner for authors at the Library of Congress, followed by an author breakfast on September 24 at the Washington Post.

McNair has authored or edited 18 books, including poetry, essays and anthologies. His most recent volume of verse is “Lovers of the Lost: New & Selected Poems” (David R. Godine). His poetry has appeared in the Best American Poetry, the Pushcart Prize annual, the Writer’s Almanac, NPR’s Weekend Edition and more than 60 anthologies. He has held grants from the Fulbright and Guggenheim foundations, two Rockefeller fellowships and two NEA grants in creative writing. Selected for a United States Artists Fellowship in 2006, he has been called by Philip Levine “one of the great storytellers of contemporary poetry.”

Finney will be reading at 7:30 pm in the Landing with food provided and books for sale courtesy of DDG Booksellers.

A nationally-recognized poet and author of four collections of poetry, Finney has been critically acclaimed as “one of the most eloquent, urgent, fearless and necessary poets writing in America today.” Her work includes, “On Wings Made of Gauze;” “Rice,” which received a PEN America Open Book Award; “The World is Round,” winner of the 2004 Benjamin Franklin Award for Poetry; and “Head Off & Split,” published by Northwestern University Press in February 2011. She has also written a collection of stories titled “Heartwood” that was published in 1998 and in 2006 she edited “The Ringing Ear,” an anthology of African American poets writing and reflecting on the South.

Finney has taught at Smith College; Berea College; and is a former faculty member and currently on the board at Cave Canem, a writing home for African-American poets. She is presently professor of creative writing at the University of Kentucky. 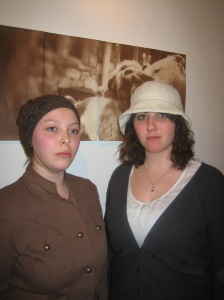 Students from The Splendid Drunken Twenties class, Poetry and Pragmatism class, and the University of Maine at Farmington’s (UMF) Creative Arts Ensemble united in mid-March to read Gertrude Stein’s “A Circular Play.”

The play could straightforwardly be described as unique if not absurd or even illogical.

Four people stood in the doorway greeting attendees.  “Here, please read the words in bold.”  The pink paper contained broken unintelligible sentences, single words, and gibberish, some of which was in bold.

The projection of a red square was apportioned three dimensionally atop a square opening. The opening adjoined perpendicular white walls.

The performers’ costumes varied from very elaborate dresses, outfits, wigs and make up, to no costume at all.  Small groups of students formed human circles around a large square room broken by an open central stairway.  Other students sat on a small, two step stage, or stood near the front of it. 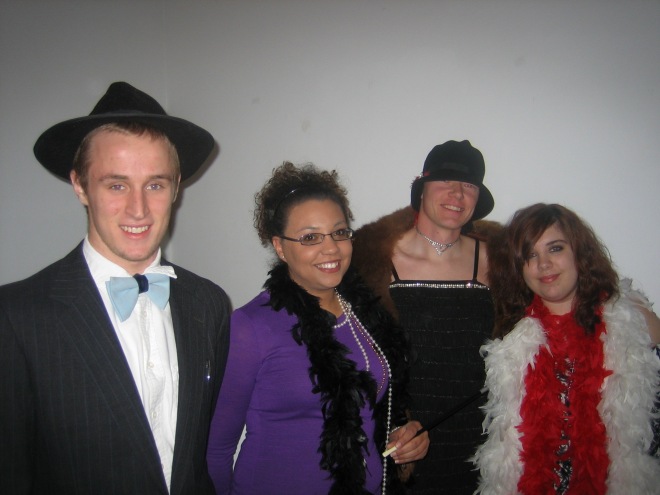 The actors and actresses commenced reading their lines. Confusion ensued.  Sentence structure and order were absent from the lines they articulated.  They babbled on to each other in fantastic dreamlike conversations.  Unnatural statements spewed in a bewildering anti-pattern.  High and then low, here and there, passionately and then dispassionately the words rang without clear meaning.  One spoke, then 30 or more simultaneously, then one. Unrelated statements mingled and swirled in incompatible consortiums. Guitars and drums began, surged, faded, and started again. 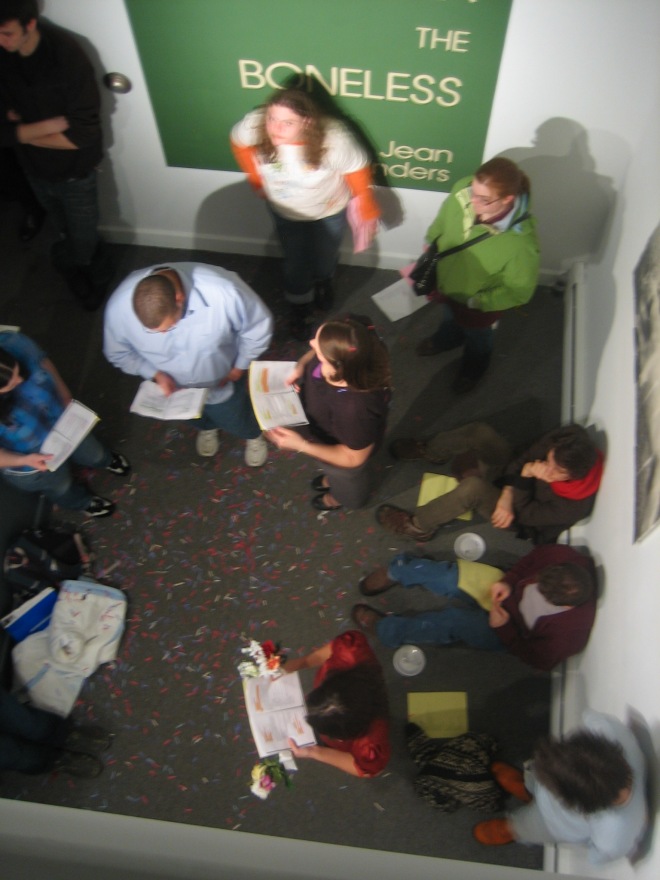 A circle of readers, from above, with confetti.

An interpretive dancer fluttered and dipped about, her moves connected yet somewhat independent of the rhythms of the instruments and voices.

“Crushed circle.” “Strawberries or meat.” “Conversions and remorse.” “I gather in a circle.”

The audience read their lines aloud alongside the performers.

After the show spirits were high as students and teachers, playfully known as “instigators” or “visionaries,” conversed about the performance.

“One of the things about Stein is that she denies the reader of a stable sense of the meaning of the text” said Kristen Case, Professor English at UMF. Case accompanied four “instigators” including UMF Professors Michael Johnson, Gustavo Aguilar, and Elizabeth Olbert.

The mysterious and confusing nature of the play would not be disentangled by Case; “The reader will have to figure out what’s going on.” said Case. “It’s a collective experiment.”

Johnson went on to explain the nature of the play and why people get so mystified when trying to wrap their heads around it. “It isn’t something to understand, it’s just something to take in and experience,” he said.

UMF students Emma Nelson and Breanna DeLuca played the characters Gertrude and Alice, the narrators of the play.

“A lot of things are insinuated in Stein’s writing.” Nelson said, “It depends on how you say the words, it’s really abstract and really cool. They have two meanings so you can look at it two different ways.”

DeLuca, a last minute add-on, took on the role of narrator with little time to prepare.  She was brought in to read just a day before the performance. “I was supposed to be the costume consultant, it’s stressful but fun,” she said.

Welcome to WordPress.com. After you read this, you should delete and write your own post, with a new title above. Or hit Add New on the left (of the admin dashboard) to start a fresh post.